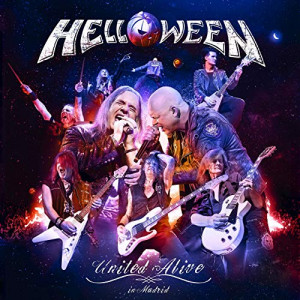 On 4th October the ultimate live recording of Helloween’s Pumpkins United tour will be released.  Here are more information about it:

4. 5Disc Vinyl Box
Live concert Madrid plus bonus tracks: ‘March of Time’, ‘Kids of the Century’, ‘Why’ and ‘Pumpkins United’

The DVD/Blu-Ray »United Alive« nails the phenomenal sets with close quarters recordings from Wacken in front of 75,000 metal heads and 14,000 fans in the Madrid arena, and as a bonus tops it off with the legendary gig at the Espaço das Américas in front of 8,000 Fans in São Paulo. Over three hours of live material in stereo and premium 5.1 surround sound, plus extensive background material, a movie compilation with the essentials of the concert’s LED content, all cartoon clips of Seth and Doc as well as a very personal 30-minute band interview about the past, present, and future.
Very pure, the Live-CD/ Vinyl »United Alive In Madrid« has nearly three hours of unbridled PUMPKINS live madness up its sleeve – including bonus tracks of the shows in Prague, São Paulo, Wacken, and Santiago de Chile.

The “Pumpkins United” tour marks the first time Kiske has played live with HELLOWEENsince 1993. Hansen, who departed HELLOWEEN in 1988, has been joining the band onstage on various tours and festival appearances throughout the years. The set features several duets with Kiske and his replacement, Deris, along with many rarely played songs, including “Kids Of The Century”, “Rise And Fall” and “Livin’ Ain’t No Crime”.